Work has been the most important thing in my life. It’s my identity, and has been the greatest source of reward. Yes, my kids mean more to me now. But, for 35 years, the majority of my waking hours, effort, skills, and even relationships have been focused on work. Is that dysfunctional, or American? The answer is yes.

Initially my focus on work was driven by women. Specifically, I wanted to impress my mom, and to gain access to a broader selection of mates. In college, I registered that fairly unimpressive men received (as we barreled toward graduation) a disproportionate amount of attention from women if they drove a BMW or could host us at their parents house in Palm Springs/Laguna Niguel/Aspen.

I secured a job at Morgan Stanley by lying about my grades and having the good fortune to interview with a guy who had also rowed crew: “Oarsmen get an automatic offer, as you’re willing to kill yourself in pursuit of a goal.” OK then. My analyst class at Morgan Stanley had 89 kids; I was (generously) the 88th best analyst. Number 89 was (no joke) escorted out of 1251 Avenue of the Americas by the FBI and convicted of insider trading.

My focus on work turned serious when my mom got sick, as I knew I would need to take care of her. Then it became an obsession when my first child was born. The nurses in the delivery room (pro tip: Good healthcare is a function of the nurses, not the doc) were more worried about me than the newborn or the woman doing all the work. I could not stand, and I was so nauseous and faint. I was processing — badly — the realization that four decades of selfishness, and failures remaining private, had come to an end.

For me, being a dad meant, first and foremost … work. Specifically, providing economic security for the science experiment brandishing a blue wristband marked with my surname. The first two years of his life, I was barely there. The same with his younger brother. While their mom needed my support, I found no evidence babies need their dad (can’t wait for the hate on this). Yes, they recognized me and smiled … as they did with the dog, nanny, and toaster oven. Properly motivated, I turned to work.

I’m not alone in looking back on life defined by work. Our work constitutes our economy, it occupies most of our time, and it determines our friendships, mates, geography, and health and welfare. English is supposed to be the most nuanced language, with more words to provide more texture to communicate. Yet it falls short on the word “work,” as the concept covers a surface area that the single syllable can’t encapsulate. Note: I’m especially proud of the last sentence.

We take this four-letter word for granted. But work is always changing, and it’s entering a period of particularly rapid evolution, driven by a pandemic, by technological advancement, and by global economic shifts. It’s worth considering what we talk about when we talk about … work.

So, who works? Likely the most significant social change of the 20th century was the large-scale entry of women into the workforce. In 1900, around 10% of women worked outside the home, and virtually no married women did. Today, 56% of women are employed (vs. 68% of men). We’re still figuring out how to implement this change to the social order. Major policy debates over pre-K, child tax credits, and school lunches are the aftershocks of these tectonic plates shifting. This period also saw battles over the access, or lack thereof, to work based on race, sexual orientation, and national origin. These questions are settled, even as the white patriarchy desperately yelps for relevance. (I’m watching the Jan. 6 hearings.) The old order has lost; we’re now fighting over the terms of surrender. (Good thing.)

Work is always changing, though, and the next turn of the evolutionary wheel will be the lengthening of the working career — ever-older workers. Americans turning 65 today can expect to live 18 (men) to 20 (women) more years. That’s going to push retirement off for many, who don’t want to hang it up, keeping knowledge and wisdom in the workforce, but also blocking the growth and emergence of the young and innovative.

For more people every year, work means a desk, a computer, and a day spent moving information around. Since 2002, the number of manufacturing workers has declined 17%. In that same period, the number of professional and business services workers has increased 38%. Across all industries in 2020, companies on average spent 4.25% of their revenues on technology budgets. Tens of thousands of years ago, our ancestors worked as hunter-gatherers. The ROI was shockingly bad. For every calorie expended sourcing food, we received three calories in return. But our ancestors worked far less than 40 hours a week overall — anthropologists have pegged the weekly burden of one African tribe at around 15 hours.

When we invented the plow, the return exploded from 3 to 33 calories. Modern farming tools pushed it to 300. With industrial food production, work became less food-centric and, surprise, we became more obese. However, our larger appetite for prosperity (and work) was not sated, and we started building railroads, lightbulbs, larger houses, and computers. Then computers that fit in our pockets. Humans are apparently wired to work.

Today, we have legal limits on the time spent working. That’s because by the late 1800s, the work week for many was over 70 hours long. Work-life balance got a boost in 1926 when the Ford Motor Company introduced the 40-hour work week (Henry Ford figured out that assembly line workers became less efficient after eight hours, so he instituted three shifts per day). Fourteen years later, in the midst of a global labor movement, the 40-hour work week was codified into law. Five days to work, two days to chill. Not because that was a good system, but because that’s what labor and management ultimately negotiated. The most important and widespread principle of daily life, the 40-hour work week, is the product of early 20th century industrial politics.

Like an infection destroying bone, technology is gnawing at the 40-hour backbone of our work structure. No factory whistle shuts down email or Slack. Our great grandparents fought to give us the right to go home at 5 p.m., and now we worship at slabs of semiconductor-infused glass that bring work home with us.

Tech is dispersing another fixed point, the office. The first dedicated office building was built in Britain in 1726 — designed for dealing with all the Royal Navy’s paperwork. Two hundred and fifty years later came the cubicle, which upon arrival received a New York Post headline titled “Revolution Hits the Office.” Privacy, efficiency, speed … what’s not to like? Like most things, we learned to hate it.

Today, office buildings are beginning to resemble the pyramids. Things we marvel at, that serve little functional purpose. 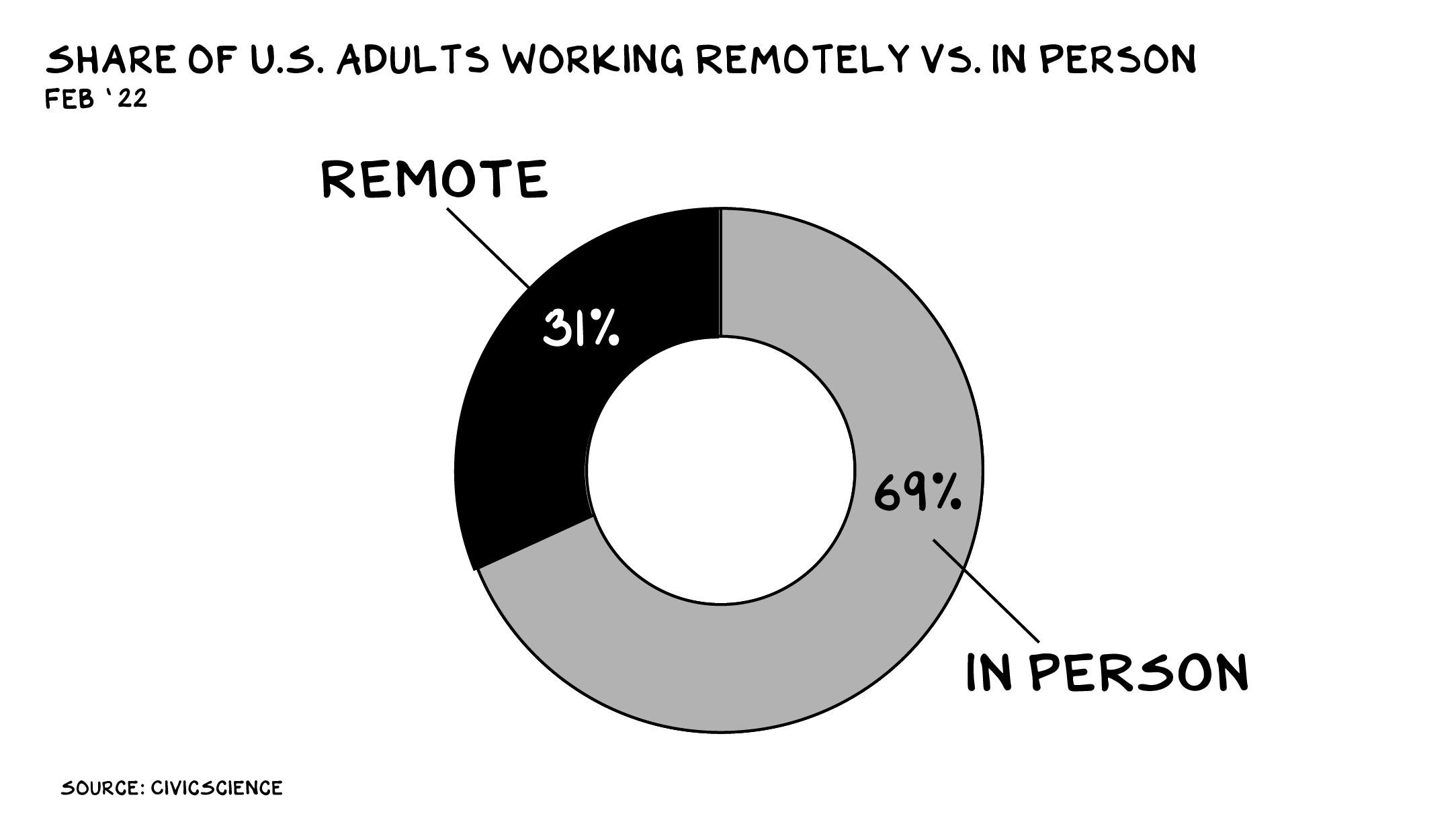 It’s easier to process data as zeros or ones, and the question is, will the office resemble the Before Times or be all Zoom? The CEOs attempting to mandate, then walk back, directives to return to the office built their success in the Before Times and see remote work as a vacation or sick day. So … which is it? For the majority of companies, the answer is, again, yes — a hybrid. Remote work could be a huge unlock for caregivers who could save 10 to 20 hours a week not having to commute. It should also be apparent that remote workers will likely make less money and not advance as quickly.

The only person we’ve lost at Prof G Media was a 24-year-old who left us for a cafeteria. Specifically the Google cafeteria, where he will make friends, get advice from mentors, and maybe meet a mate, vs. doing Zoom calls from his 600-square-foot Brooklyn apartment. My advice to young people: Choose the office. For every promotion there’s two to three qualified people; the promotion will go to whomever has the best relationship with the decider. And relationships are a function of contact/proximity. If you can do your job from Boulder, it can be moved to Bangalore.

Maybe we should think more about the why. We work for economic security and relevance — meaning, even. Just as we have incorrectly conflated masculinity and toxicity, work has errantly been positioned as the enemy. Something that depletes us, a necessary evil whose taskmasters (i.e., bosses) are inherently compromised people. Yes, sometimes. However, for most young people, I believe there are few things that can solve more problems (loneliness, stress, depression) than work. Good work. And the path to good work usually involves shitty work.

As important as work is, it isn’t the only thing, nor is it the only venue. We’re most effective at work when we establish a universal — but limited — scope of what work is about. Developing boundaries is a natural part of coming to adulthood, and young people (and some oversharing olds) struggle with this. We’re in a period of boundary breakdown now, as the notion of “bring your whole self to work” has taken hold. My advice to ambitious young people: Don’t. It advances neither the cause nor the career. Earn wealth and influence at work, convert that into social change in the wider world. (Note: This cuts both ways, applying equally to capital and labor.)

The species that endured for millions of years (bees, ants, etc.) have several shared attributes: They cooperate, are remarkably adaptable, and work. The temples we pray in, the media we stream, and the vaccines that protect us are a function of other people’s work. Your work, whether at home or for an organization, will play a huge role in your happiness. Early in adulthood, work is a vehicle for establishing self-sufficiency. Later, hopefully, it becomes a source of self-esteem and a way to feel connected to others and society. Opportunity, relationships, and mental health can be difficult to recognize, as often they come disguised as work.

P.P.S. My free lecture on Web3 is next Wednesday – sign up before you forget.